BLARGING is weird. It's a world. A world in the series of tubes. The tube-world can overlap with the "real" world, which makes it all the more eerie.

My Actual Friend in Real Life has a BLARG. She is super-talented and makes wonderful things that make me think better of the world than I am wont to on average.

She used this ribbon to make a wrist pincushion: 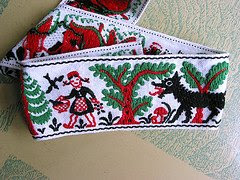 See? She even teaches you how to make the things that make me think better of the world &c.

I think that the Charles Perrault version of "Little Red Riding Hood" is far more interesting than the sanitized versions. The chick gets MUNCHED by the wolf. Here's what Perrault says is the moral:
"From this story one learns that children, especially young lasses, pretty, courteous and well-bred, do very wrong to listen to strangers, And it is not an unheard thing if the Wolf is thereby provided with his dinner. I say Wolf, for all wolves are not of the same sort; there is one kind with an amenable disposition — neither noisy, nor hateful, nor angry, but tame, obliging and gentle, following the young maids in the streets, even into their homes. Alas! Who does not know that these gentle wolves are of all such creatures the most dangerous!"

The Perrault version has all the reassurance and loveliness of Der Struwwelpeter. Der Struwwelpeter is scary, and my friend Manuel (who was born in Germany) actually was given it to read as a child. So he got to read stories such as the title story, in which, according to wikipedia (which tells no lies) "a boy who does not groom himself properly...is consequently unpopular." 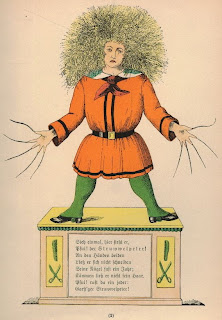 BRUSH YOUR TEETH! CUT YOUR NAILS! OR RISK SOCIAL OBLOQUY!

I saw a theatre production called Shockheaded Peter when some friends of mine (who are excellent) took me to NEW YORK CITY. Because they are nice and like me. The theatre production was very great, especially the version of "Die Geschichte vom Daumenlutscher" (The Story of Little Suck-a-Thumb), in which "a mother warns her son not to suck his thumbs. However, when she goes out of the house he resumes his thumb sucking, until a roving tailor appears and cuts off his thumbs with giant scissors."

BLOOD! BLOOD! AWFUL! OBEY YOUR PARENTS! BE GERMAN! WHATEVER! ICKY!
Posted by Blaize at 12:29 PM 4 comments: