Green Kitchen tagged me with this topic.

I have a bit of a problem, in that I really don't think there is much about me that would be surprising to anyone who knows me well. A stranger would also find nothing surprising about me, because he or she wouldn't really care. Weird, maybe; surprising, no. Therefore, I imagine that the ostensible audience of a post concerning "six surprising things" about me is people who sort of know me a bit. Since I think that the people who read my BLARG either know me well or are strangers, I guess my only real audience is futuregirl, who doesn't know me well (yet), but is not a stranger, and who reads my BLARG (Q.E.D.). So, to Alice: Enjoy!

Then I would hang up. And do it again. And again.

2. I have been known (though not lately) to go every week to the local Spooky Dance (i.e. goth night) wearing all black with platform boots and, once there, throw myself about to loud music, casting out demons. Becky says I dance like a broken doll.

3. One of the chapters in my never-completed dissertation analyzed the media accounts of the execution of Timothy McVeigh vis-à-vis Elizabethan and Jacobean revenge drama and sixteenth- and seventeenth-century public execution.

4. I have handled a document signed by Queen Elizabeth I.

It was in English, not Latin, but was still in secretary hand, which made it hard to read even in English. Luckily, I had been trained to read that kind of handwriting, a skill that actually still comes in handy when deciphering doctors' handwriting. This document was at the Folger Shakespeare Library, where I was doing research and taking a course on secretary hand. The manuscript archivist didn't know about this particular document, which I found in a box with other not-very-well-catalogued items.

5. Although my mother denies it, I know for a fact that I only took a bath once a week when I was a kid. I may have changed underwear slightly more frequently, but not that much more frequently. The reason I know this is that my well-meaning (but, in this case, cruel) third grade teacher, Mrs. McClenndon, had us go around a circle and say how often we changed our underwear. I, luckily, was not first and, as the others revealed their underpants truth, I realized that "once a week" was Not a Good Answer. So I said every other day, because I wasn't so much a liar as to say every day, which seemed to be the preferred answer. Or maybe I did say every day, after Jeff Sidler was chided for every-other-day panty rotation. Whatever. I didn't feel personally bad about my infrequent bathing and underpants changing; I was prepubescent, and my outer clothes were clean, so it's not like I smelled. I was just embarrassed to have to talk about it in front of others whose standards were clearly different.

6. I like riding around in the car with Michelle because she has been listening to the same Best of Billy Joel album for at least a year, and her older son sings along now. He appears to be undamaged by the experience.
Posted by Blaize at 9:22 PM 11 comments:

Green Kitchen has evoked my knowledge of made-up places to describe Planet Crêpe, home (or at least headquarters) of Spaceboy. I have been doing some research, and am finding that some of the material on Spaceboy (who, despite his boyishness, is quite important) is classified. While I am waiting on my access pass from the higher-ups (or His Nibs, as I like to call them), I can at least tell you what Spaceboy is up against in his fight for the goodness of batter, nutella, and all that is right in the universe.

nestle closely (astronavigationally-wise) with the planets that are the respective sources of such Earth cultural phenomena (loosely-termed) as Kenny G,

Huge space freighters trawl this part of the universe, collecting enormous cargoes of nougat, etc., which--after space flights the like of which would implode the brain of any Earthling--the crews of said freighters then dump on an unsuspecting and fully interpellated population here, ON EARTH.

It is unclear whether this cargo dumping is controlled by and paid for by some global cabal of such secrecy that it makes the rules for Fight Club seem as innocuous as the instructions on the back of a box of Tampax. If this were so, one shudders to think in what coin the aliens are being paid. Virgins? (Always in short supply, therefore likely impracticable.) Anime? (Of no evident value, therefore potentially interesting to our nougat-purveying alien "brethren.") Panda bears? (Since they won't even HAVE SEX TO SAVE THEIR OWN SPECIES, perhaps they, too, are from the Gamma Quadrant.)

Or, on the other hand, are the aliens of the Gamma Quadrant merely dumping space freighter-loads of shillelaghs,** nougat, Kenny G, Chia Pets(tm), and supply-side economics on Earth as a sociological experiment the parameters and labyrinthine logic of which would implode the brain of any Earthling.

Or, are they just trying to implode our brains?

I am too depressed by these various scenarios to create a proper manifesto moment for this analysis. I leave it to Spaceboy on Planet Crêpe to shape our future fate, the fate of the Gamma Quadrant, and the fate of the galaxy in sum. Once I find out what the heck he's doing about it, I'll let you know.

*Since no one has EVER given my a decent (by "decent" I mean "can be heard in mixed company") explanation of what the hell nougat is, I believe it comes from space.
**Don't ask about the shillelaghs; they just crept in.

The Best Indian Restaurant Ever

My parents went to the Peace Corps in Kenya my last year of college. When I graduated in 1990, my sister and I went and visited them. After 5 days in London, and a flight that took us through a layover in Muscat, Oman (an experience that would require an entirely different post to describe), I remember seeing my tanned and skinny parents waving to us from on top of the building of the Jomo Kenyatta airport as we walked in from the tarmac.

We took the bus into Nairobi from the airport. While we were on the bus, a riot started in the city, and people were pushing onto the bus, trying to get away from the rioting. My mom helpfully said, "Oh, yeah. I thought there might be problems today." Thanks for the heads-up, Mom. When we got to somewhere she sort of recognized, we pushed our way off of the bus. My sister was in front of me, and I put my arm around her front, grabbed my mom's wrist behind me, and used my entire weight and the weight of our backpacks to PUSH us through the panicky people trying to get on the bus. Then we walked to the hotel where the Peace Corps people generally stayed in Nairobi, the Hotel Pigali, which was, in some ways, a shithole,

and, in some ways, the best hotel I've ever been in: narrow beds with inadequate blankets in rooms with poor mosquito screens on the one hand; 7-foot long porcelain bathtubs on the other. I wallowed like a hippo in the hot water, once the hot water came. I couldn't find a picture of the Hotel Pigali, but this picture gives an idea of the age and style.

That night, the streets were empty, except for truck-loads of soldiers toting semi-automatic weapons. Nonetheless, some other (much younger than my parents) Peace Corps people convinced us that it would be a really great idea to walk through the deserted streets to an Italian restaurant near the City Hall. I was cringingly aware that we could only walk around during this effective curfew because we were white. The food at the restaurant was weird, as one might expect for an Italian place in an African capital city. However, it was there that I was first introduced to the wonders of Kenyan-style tea, served with milk and sugar already incorporated. 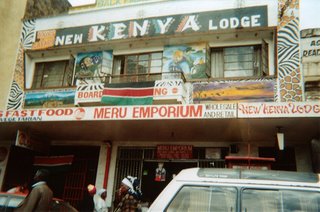 The inside looked like a cross between a McDonald's and a sterile ice cream parlor. We ate upstairs, by the windows overlooking the market. The name "Slush" came, evidently, from the astonishing panoply of milkshakes they served, including ones flavored with saffron. The milkshakes were the only really "expensive" thing on the menu, and could run as much as, say, $1.50. The huge glasses of passion fruit juice were more reasonably priced at 50 cents or so. You could also get pizza and hamburgers (of a strange sort), and, best of all, Indian food. The Best Indian Food I Have Ever Eaten®. Potato bhajias, vegetable samosas, chutneys, and things I can't remember, but that somehow, there, in the quick equatorial dusk that seemed to press in with the strangely soft air through the open windows, with my strange family, were just really really satisfying.
Posted by Blaize at 3:58 PM 4 comments:

I really dislike the comparison of suffering. When people say to me, "Oh, I've had problems, but not as bad as yours," I reply, "It's not a CONTEST." I did not medal in the Suffering Olympics, nor have I won the prize in the Suffering Sweepstakes.

I believe that suffering is an activity, and that there is no real way to measure it. As it says in La Jetee "il soufre," "he suffers." Suffering is a fact. We all experience and engage in it at times.

My friend, for example, has gout.

I refuse to believe that his suffering is any less agonizing than the suffering I am having due to melancholia.

Or the suffering I experience because of mixed mania.


My gout-ridden friend might disagree, but he's a tough guy, and what amounts to basically kidney-stones-of-the-toe isn't going to faze him.

I suffer; you suffer; we suffer. In the end, it's just not that interesting, and certainly does not qualify as something we should be having a contest about. Then again, perhaps some things are worse than others. [Warning: Don't click on the next link if you are in an emotionally susceptible state.] Can our enemies suffer? Or does our hatred for them preclude their suffering, because we refuse to suffer for them or with them?

Maybe there is a gold medal after all, but no one will win it because that one judge is always giving a 7.9 to what was a perfect 10 performance.
Posted by Blaize at 12:16 PM 1 comment: