I decided that the layout I had chosen from flickr was inadequate for this particular image, so I'm posting it again. Yet, I am not removing the older one, because futuregirl commented on it. Did you hear me? FUTUREGIRL COMMENTS ON MY BLARG! I AM IMPORTANT! WWPPD
Originally uploaded by St. Blaize.
I made a motivational poster, for no reason except that I could. The idea, unfortunately, is not mine. But, hey! I was the one who did the ACTUAL work of, um, finding the image using Google then using flickr toys to make the poster. It was hard work. Really, really hard work. Kind of like the war on terror. Oops! Did I just say "war on terror"? WWPPD in this kind of situation? Gotta go!
Posted by Blaize at 8:32 PM 1 comment: Supersaturated Abandoned Weinerschnitzel
Originally uploaded by St. Blaize.
I've been enjoying messing with supersaturation, just using Picasa, because it's so easy monkeys could use it. And I'm a monkey. So here, my friends, is the abandoned Weinerschnitzel. I didn't know they could BE abandoned. I thought that once they were done with doing their "business" they shot back off into space. You know, where they came from.

Oh, and the real reason I posted this is because I finally figured out how to associate my BLARG with my flickr stuff. It only took me a few months. That's fast, right?
Posted by Blaize at 11:33 PM 2 comments: 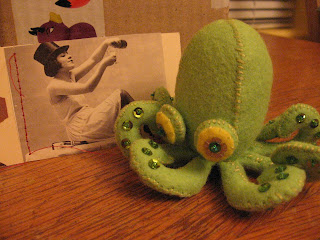 Linus the Octupus has come to live at my house. Linus is the first object I have received as a direct consequence of BLARGING. Or, rather, of commenting on other people's BLARGS. Maybe it doesn't quite count, because I know Bethany In Real Life, but I still got Linus because I commented on Bethany's blarg anniversary, and she drew my name from all the names of people who commented on that post.

Whatever the reason, Linus is now in residence, and has made friends with the other members of my Stuffed Toy Revolutionary Squad, which consists of Woolfrog and SubSubComandante Marcos (they're both from Chiapas, Mexico). 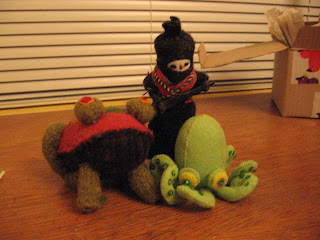 On a different note, since I tend to spend most of my days in various states of grubbiness, it's nice every once in awhile to dress up, though nothing can alleviate the wretched state of my fingernails. The red object hanging from my shower rod is a clothespin holder that I got from Becky and Brindon one time when they were selling stuff at the Antique Fair downtown. The dress was given to my by my friend Katja at a time in my life when I thought I would never ever look pretty ever again. The dress made me rethink that idea and, coupled with kind words from my mother, was a key component in ending a six-month-long "nervous breakdown" I had seven years ago. It is the best dress, in that it 1. never needs ironing, and 2. fits me whether I am weighing 172 pounds or 158 pounds. I think it's magic. 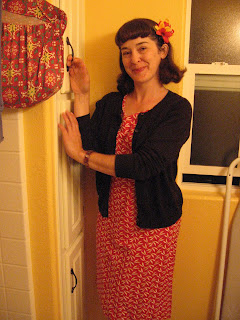