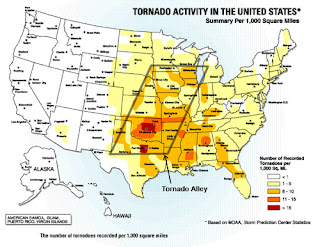 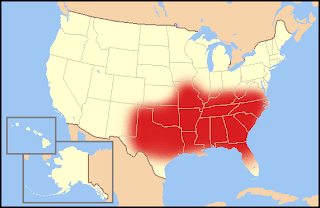 I'm from eastern Colorado, and I used to have tornado dreams several times a week during the season. I did see funnel clouds, and I saw a rope tornado that touched down. I could see the dust and debris coming up from the bottom. I think I almost lost continence from a kind of wild primal fear.

Anyway, I have always been amused by the juxtaposition of Tornado Alley and the Bible Belt. Maybe the threat of being wiped off the face of the earth, as happened (sadly) in Greensburg, Kansas, makes people more interested in believing HARD in God.

It is coming around the time of year for my annual "crisis of non-faith" where I feel really shitty that I can't believe in God or a Universal Life Spirit or anything like that. I have known many people who got immense comfort from such a belief, and while I generally go about my days as a law-abiding and (I think) ethical and moral atheist, about once a year I am sad that I cannot participate in the great and moving cultural interaction of Faith. Because even though I don't think there is a God, I do know (KNOW) that faith is an operational thing between people, something that, from time to time, helps individuals and groups be more than what they could be without it. The crisis of non-faith usually resolves when I start thinking of all the bad things done in the name (names) of God (gods).
Posted by Blaize at 2:29 PM 5 comments:

So, this appeared in the "Best of" issue of one of the local weekly rags. The news editor, for fairly obscure reasons, decided I needed to be in the issue. It's funny because there are so many interesting tour guides in this town, but since they are all affiliated with museums, colleges, state parks, etc., I guess I'm the only "independent" docent in town. Hence, the BEST.

Since I had misplaced my notes for the Beach Hill tour, I had to re-research and recreate the tour. I was worried that too many people would come, since the first time I advertised a tour publicly 114 people (That's right. One hundred fourteen.) showed up. Evidently Super-Secret Staircase Tours were an "unmet need." Who knew? I made 60 copies of my handout, just in case. But I need not have worried; only people from Free Skool showed up. Proof that no one reads the local weekly rags?

Anyway, there were 20 participants or so, the tour went well, and I didn't feel like crap for 2 hours afterwards like I usually do. The newspaper thing is flattering, and I will say that it was the largest picture I have ever seen of someone I actually know.